The Year of Jubilee calls for a year of serving and giving back to the community, the blessings that God, the Father, has showered upon us. To mark this, Community Services ran a series of Feed5000 in various housing estates at Bukit Merah, Queenstown, culminating in a big bash – Celebrate Jubilee @ Commonwealth” on 14 November, in partnership with the Buona Vista Commonwealth Crescent RC.

With the help from 190 volunteers and staff, 600 Jubilee goodies bags were packed and distributed to residents who turned up for an evening filled with fun games, performances by our children, Teochew and Cantonese opera songs and even a traditional Javanese dance item. Guests were also introduced to the services of “365 Cancer Prevention Society” located in the vicinity.

The spirit of celebration was evident with residents clapping and dancing to the tune of “Labamba”accompanied by Cajon drum beats and later singing our national song, “Home”, together as one voice. The night ended on a sweet note with three residents being picked to take home the top ‘Blessed Prizes’ along with another 200 residents receiving consolation prizes.

It was truly a blessing to play such an instrumental role in spreading the fragrance of Christ in the community. 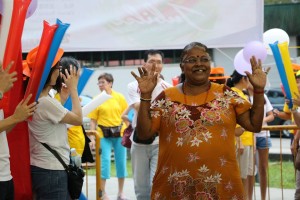 Guests receive a warm welcome to the event.

Dancing the night away!

Rev. Eric Chiam picking one of the winners of our Blessed Prizes.

Our happy Commonwealth resident with her Blessed Prize!

Our team of volunteers.

A Jubilee Children’s Carnival was held at Commonwealth Crescent.

Arts & Craft with the children of Commonwealth.

The children enjoyed themselves in the dinosaur bouncy castle.

They also enjoyed having their faces painted.

Led by Community Services, the Jubilee Children Carnival was a joint effort between the Buona Visa Commonwealth Crescent RC and COOS.

The Carnival also served as a great outreach platform for Community Services to team up with other ministries for the event. We had a fantastic time working alongside with Urbankidz, the English Youth, Soaring Eagles Club, Tuition for Heartlanders, Arrows and the English Cell group. There were 180 volunteers in all!

For all 238 children from the surrounding neighborhood, it was a time of play. With the exams out of the way, there was a definitive festive feel in the air. The children were issued with Carnival tickets that they could use to receive a goodie bag each. They could also collect stamps in their Carnival passports to redeem more gifts.

There were bouncy dinosaur inflatables, different game stalls made from recyclable materials, and an arts & craft section where children of all ages could choose between making a badge, a bookmark, folding an origami or colouring.

Apart from play options, there was food ranging from ice cream to candy floss and kacang puteh to popcorn. We also had interactive booths represented by the Singapore Police Force and the National Environment Agency to educate the children and spark their interest in important topics.

Celebrating the present (SG50) while looking into the future gave the children the opportunity to make their marks with handprints as well as offer well-wishes to Singapore on a board at the SG100 station. The board will be given to the RC as a keepsake as we look forward to Singapore’s next 50 years.

No carnival will be complete without colorfully painted children. There were stalls offering face painting services, glitter tattoos, balloon sculpting and portrait sketching. All this added to the excitement of the event.

A Kendama competition was held with 35 participants competing for prized branded Kendamas to be won. This trending recreational sport was a hit with children of all ages. The children from the community were especially excited for the opportunity to showcase their skills in one of the first of such competitions initiated in the neighborhood.

The Carnival ended on a high with every child taking home a bag of goodies filled to the brim with gifts and a satisfied smile on their faces.

“And whatever you do in word or deed, do all in the name of the Lord Jesus, giving thanks to God the Father through Him.” Colossians 3:17 (NKJV)

To God be the glory!

Orderliness Next to Godliness

The Soaring Eagles Club is part of the Community Outreach Ministry that reaches out to the children of the Redhill area. The Club provides the children with an environment where they can freely express themselves and learn to get-along with one another.

Conducted by different groups of committed members from various Cell Groups and Ministries, the Soaring Eagles Club is held 4 Saturdays every month at Commonwealth Crescent.

This session, held in August, was helmed by the English Youth team who did a wonderful job in connecting with the children in the club. The children were taught about “Orderliness” and they were committed to cleaning up after themselves. This commitment was put on paper as they created their own badges to remind themselves of this promise.

Brethren, my heart’s desire and my prayer to God for them is for their salvation. Romans 10:1 [NASB]

On 12 July 2015, the Community Services team together with 98 volunteers, played hosts to 269 residents from Chinatown, Ghim Moh Road, Commonwealth Crescent, Stirling Road, Mei Ling Street, Henderson Road and Redhill Close. The Jubilee Evangelistic Lunch was held at Hilltop Garden Restaurant, Bukit Batok. While this luncheon was an annual outreach event organised by the Community Services, this year’s event was extra special because it was held in conjunction with the ‘Year of the Lord’s Favour’.

The early birds were entertained with ice-breaker balloon games but the highlight of the afternoon was a skit entitled ‘The Lost Son’ and Albert Lim’s testimony of an ex-offender now living in God’s grace.  These truly captured the essence of the message of the jubilee and touched many hearts.

The exciting lunch programme also included a “blessed” draw as well as a cha-cha dance segment that had many enthusiastic residents come to the front to dance.

At the end of the luncheon, 10 residents chose to receive Jesus Christ as their Saviour and Lord, 5 residents re-dedicated their lives to Christ and another 9 residents requested for prayer.

Suffice to say, the event left a lasting impression on everyone involved. Quoting a remark made by a couple from Commonwealth Crescent, “If you have any [future] events, please invite us.”

Written by Community Services and COOS Web Team.
Posted by COOS on .

WHAT'S ON IN COOS